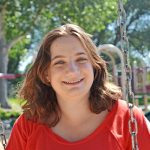 By seventh grade I had elected that I wanted to be a journalist. Whether this desire came most from my long-lasting love of writing, my fledging experience on a yearbook staff, or my everlasting obsession with the show Gilmore girls is now unclear, I’ve stuck with it for eight years and have no intention of quitting.

I followed this passion into high school immediately and became involved in the yearbook. By my second year on staff, I was promoted to one of the two editor positions available and was in my niche when I was able to not only write my own pieces, but also help to improve the writing of others on staff. I became the leader of a rather inexperienced staff and kept that role for the next year, being pushed into the new role of editor-in-chief. Yearbook was always this sort of chaotic mess but I found that even through the deadlines and stress, I loved it and was excelling at what I was doing.

It broke my heart when I had to graduate only because it meant I had to leave my yearbook and staff behind, but I was moving on and had every intention of continuing my writing and journalistic pursuits. Drake University is fortunate to have many great publications that I can contribute to. Beginning my first semester, I started to contribute to the student newspaper, The Times-Delphic, where I’ve worked as a features staff writer, working on different types of stories including human interest pieces, news features, profiles and as a bi-weekly writer for the Humans of Drake column. I’ve also worked as a staff and copy editor for the Drake Political Review magazine, which has become a new passion as I prepare to be Editor-in-Chief of it for my senior year.

Writing is something that is important to me ever since I wrote my first story in third grade. I’d like to think my creative writing has improved since my debut of The Littlest Sea Turtle, but I’ve also noticed that my interest in creative non-fiction and reporting has significantly spiked. The nonfiction writing that I used to resent has become my life and really, it’s fitting. I have always been the one to write emails, draft social media posts and compile notes in group settings. My planner and notebooks are full of small notes I make when something comes to me and the notes app on my phone is full from thoughts and drafts.

One day, writing won’t just be a passion but something I’m fortunate enough to do every day as a career. Until then, I’ll just keep on writing.